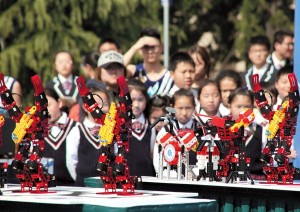 THE application of virtual reality technology in education is the focus of the 13th Shanghai Education Expo, which kicked off yesterday and will run until tomorrow.

A long queue of people keen to try out a driving simulator, which is used for teaching automobile engineering majors, formed in front of the Shanghai Public Utility School’s booth yesterday.

The simulator, an engineless car with a computer screen displaying roads, shows users how they are “driving.”

“The simulator is helpful because it gives students a vivid experience of driving instead of just telling them how to operate a vehicle, and we don’t have to risk accidents with real cars,” said Wang Zhiwei, principal of the school.

Some visitors were quite excited about the chance to experience the thrill of being behind the wheel.

“I have no driving license, but I can experience it here with very similar effects,” said a female university student surnamed Li.

“It’s a cool experience, although I crashed the car several times because I actually don’t know how to drive.

“Now I think I’d better learn to drive carefully, so I don’t kill people on the road.”

At the booth of Shanghai Technical Institute of Electrics and Information’s booth, many young students were waiting to try out special glasses to enter the “living room” on a computer screen.

Those wearing the glasses “walked around” the room by turning their heads in different directions.

Peng Xuehai, a teacher from the school’s VR lab, told Shanghai Daily that the system is being used by teachers to show, for example, what a particular interior design concept will look like.

“By wearing the glasses, you can see what the room will look like after the design is incorporated,” he said. “And if you are not satisfied with it, you can continuously change the design in the system until you are satisfied. It’s really convenient and environmentally friendly.”

An experimental VR system has been developed at the university over the past 10 years to help students learning manufacturing techniques, such as mechanical engineering, to examine their designs and practice manufacturing processes before operating real machines.

“Now they can see their ideas in the VR system before producing physical ones. It saves the school a huge amount of money.”

He added: “Some students may operate machines improperly, injuring themselves or damaging equipment. Now such accidents have been reduced as they are required to practice with the VR system.”

Du said the VR system has been improved considerably since it was first developed in 2005 and now simulates most manufacturing techniques.

However, he stressed that VR is only preparation for the real hands-on training that is needed to achieve proper craftsmanship.

“VR is one of the most pioneering technologies to be integrated with education,” said Du Shoulong, director of the expo organizing committee, “and these are only some of the schools that have taken the lead in utilizing it. More schools will join them to further combine cutting-edge technology with education.”

“The authorities will work to ensure it plays a positive role in educational reforms,” Du added.