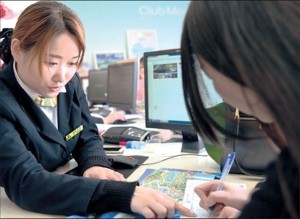 Major authorized online tour operators, including Lvmama, Ctrip and Shanghai Spring International Travel Service, have reported a surge in bookings for tour packages related to the park, which is scheduled to open on June 16.

Lvmama said a two-day, one-night package with park pass and hotel accommodation has been the most popular. “People have been calling in to ask about the package, and bookings have grown steadily since Monday,” said a Lvmama employee.

Ctrip, China’s largest online travel agent, said packages that combine the Disney resort with nearby towns are also popular. It said bookings were made by residents from more than 60 cities, including inland cities such as Wuhan and Changsha.

Ctrip now offers 70 packages related to the resort. Data showed budget hotel prices near the resort have risen more than 50 percent since tickets went on sale.

On Monday, park passes for the resort’s opening day were snapped up in minutes. Industry analysts said the park’s debut will help boost tourism in the Yangtze River Delta.

Disneyland will bring an increase in visitors to Shanghai and neighboring cities, said Xue Peipei, an analyst with Shanghai Huatai Securities, and nearby tourist destinations such as Wuzhen, a historic water town about 130 kilometers from Shanghai, will also see more visitors.

He Jianmin, director of the tourism management department of Shanghai University of Finance and Economics, said the park will drive coordinated development of cities in the Yangtze River Delta.

The resort is expected to attract 10 million visits each year, according to Shanghai Shendi Group, Disney’s Chinese partner. However, professor He Jianmin estimates that with growing momentum in the tourism sector, visitors could top 16 million per year.