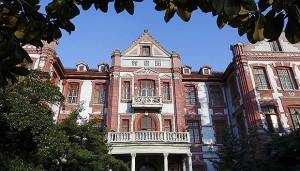 Building 120 anniversary of the Shanghai Jiaotong University, his alma mater, to the faculty, staff and all alumni at home and abroad, I extend congratulations and greetings!

Jiaotong University history has witnessed China’s higher education from scratch, from weak to strong’s struggle, is a picture of the picture of modern Chinese fight Chinese people to achieve continuous self-improvement in miniature. A Chinese modern history, the Chinese people and the Chinese nation indomitable, one nation, and rejuvenating, powers great history. Five Jiaotong University results from Hong-veined, best Mandarin spring continued constantly, in order to save the country and the country prosperous, strong magnificent career has cultivated batch after batch of steadfast, talented exceptional talents, is undeniable. It is an honor to Jiaotong University is China’s education.

Jiaotong University is an engineering institution, but it not only pays attention to science and technology education, and also attaches great importance to the education of social sciences, some Alumni put it as “Wen Fugong, workers”, there are good reasons for it. This is out from the National Chiao Tung University students, not only brighter than the stars have emerged, with the participation of technical experts and emerged many communicate through ancient and modern, leading cultural figures of the true meaning of. Sincerely hope that Shanghai continues to develop a “work and teach” tradition of education, for the motherland and people producing rich knowledge of engineering, and the humane accomplishment of the Builder. The Bo group, Mongolian General governance of talent, we construct socialism with Chinese characteristics and realizing the great rejuvenation of the Chinese nation so badly needs.

Siyuan Zhiyuan, the future, two jiazi birthday wish our alma mater as a new starting point, to transport state integrity in the name of heaven and Earth, spirit of innovation for the developing of the gel cohesion to the splendid!