Xujiahui literally means “Xu’s junction” – or, more precisely, “property of Xu family at the junction of two rivers” in Mandarin. The “Xu family” refers to the family of Xu Guangqi (1562–1633), China’s most notable Catholic convert. Most of what is now Xujiahui was once the ancestral home of the Xu family. Baptized by famed Italian Jesuit, Matteo Ricci, Xu Guangqi and his descendants donated large plots of land to the Catholic Church, including the site of the St. Ignatius Cathedral. 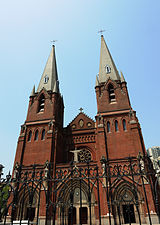 Pronounced in the Shanghainese dialect of Wu Chinese, it is called “zi-ga-wei”. During the 18th century it was known by Shanghai’s western residents as “Ziccawei” or “Siccawei” (English) or “Zikawei” or “Zi-ka-wei” (French). These names survive in the names of some institutions, such as the Bibliotheca Zikawei, and the area is still listed in a number of contemporary guidebooks and literature as “Zikawei” or some variant thereof.

With land donated by Xu Guangqi’s family and those acquired by other means, the Society of Jesus established a grand cathedral as well as an entire one square mile complex that covers most of present-day Xujiahui. In addition to the cathedral, the French Jesuits also built orphanages, monasteries, schools, libraries and the Xujiahui observatory (zh) (now the Shanghai Bureau of Meteorology).

In time to become the stronghold of Catholics in East Asia, one of the first structures to be built by the Jesuits was the St. Ignatius Cathedral in 1847, later reconstructed in 1906. The Cathedral is located on what is now known as North Caoxi Road and is still referred to in English as the St. Ignatius Cathedral. The sign on the street calls it simply “Catholic Church.” The cathedral was featured in the opening scenes of Steven Spielberg’s 1987 film Empire of the Sun.

The Bibliotheca Zikawei, now a branch of the Shanghai Library.
A number of other structures survive from its days as a centre of Catholicism. One is Xuhui College on 68 Hongqiao Road, now renamed Xuhui High School (or Xuhui Middle School). Established by Jesus in 1850, Xuhui (St. Ignatius) College was the first educational institution in China to offer a fully western curriculum. Another is the Bibliotheca Zikawei (or Bibliotheque de Mission), now a branch of Shanghai Library, adjacent to the cathedral. Several of the convent buildings scattered around Xujiahui are still visible in various states of preservation: one (structurally modified but still recognisable) serves as the office of the Xuhui District Government and People’s Procurate. The Tou-Se-We Orphanage (in Mandarin: Tushanwan) operated by the church, whose workshops supplied much of the religious art on Xujiahui’s religious buildings, is half a mile to the south of Xujiahui junction; the sole surviving building of the orphanage is now the Tou-Se-We Museum.

Catholic Xujiahui came to an abrupt end with the Communist victory in the Chinese Civil War. A few years after the People’s Liberation Army entered Shanghai, Jesuits had abandoned Xujiahui and relocated to nearby posts like Macau or Manila. Many of those who remained were imprisoned by Communist authorities. These include Cardinal Ignatius Kung (Gong Pinmei), who spent decades in prison, and Father Chang-min “Beda” Chang, who died in prison in November 1951.

Xujiahui junction at night
From 1949 onwards, most of the large houses and estates in Xujiahui were compulsarily acquired or seized by the government and converted into factories. Up until the late 1990s, the area was predominantly an industrial area.

Grand Gateway at Xujiahui Circle
During the late 1990s, many of the state-owned factories were sold off and torn down. Xujiahui is now mainly a retail district of downtown Shanghai.