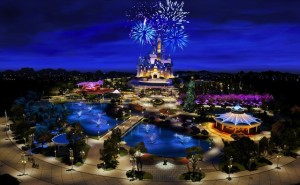 Who called it? Shanghai Disneyland, estimated to have so far cost Walt Disney Co. 5.5 billion USD, will open sometime in the first half of 2016. The opening date had originally been set for the end of 2015, as stated by Disney’s Chief Executive Robert Iger in April 2014.

No official statements have been released in regards to reasons for the delay, but considering the somewhat vacant build site, it’s understandable. The Happiest Place on Earth, soon to be in Shanghai, is a joint venture between government enterprise Shanghai Shendi (57% ownership) and Disney (43% ownership).

MarketWatch is speculating that Shanghai Disneyland will likely open in Spring 2016, or near the Lunar New Year in February.

This is useful information for those of us who like to plan (one year) beforehand for the Chinese New Year holiday. Around this time next year, it will be possible to take a high-speed rail into Shanghai Disneyland—as opposed to getting crushed in a customs line waiting to enter Hong Kong or Macau. Yeah!

RISH Chinese Summer Camp takes this opportunity to introduce this famous theme park to our students.