Shikumen Residence, literally meaning ‘Stone Warehouse Gate’, is regarded as the most representative house style of Shanghai as the Hutongs and Courtyards are representative of Beijing. It is so named due to the stone door frame. This sort of residence combines the architecture styles of southern China and western countries.

These residences can date back to the 1870s, when the Taiping Rebellion against the domination of the Qing Dynasty (1644 – 1911) broke out. Due to the turbulent warfare, the businessmen, ministers and wealthy people had to move to the concession for protection. As a result, many foreign estate businessmen had a large number of residences built to earn money. Those residences were therefore inspired by western style.

Construction Features
A Shikumen Residence is usually a two-floor building constructed with bricks and wood. On the sloping roof is a dormer window. It has a stone gate frame and wooden doors. Two copper door-knockers echo in the whole lane when they are struck. As the residences are usually linked, a lane naturally comes into being. At the end of the lane, a traditional archway can usually be found.

Stepping through the stone gate, you enter a patio from where the sunshine lights the whole yard. The major rooms are on both sides of the patio. Right in front of the patio, it is a six-meter (about 19 ft) long and four-meter (about 13 ft) wide living room where the hosts meet or treat their guests. Two lateral rooms are on each side, from which you can walk upstairs. Passing through the living room, another patio appears where the cooking bench is set.

The overall framework of the residence is in the architectural style of the courtyards in south China. The indoor furniture and necessity arrangement are also designed based on the representative architectural style. While from the outside, the block of residences looks like western-style townhouses. Moreover, the lintel was usually constructed with Chinese traditional bricks and black tiles. Later, under the influence of western architecture, the doors were gradually decorated with the triangular, circular, arc-shaped or rectangular carvings. Even the outside walls were covered with the western paintings and carvings. 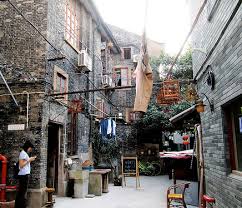 Development
ShikumenIt’s said that before the 1950s, these residences constituted up to 60% of all the Shanghai dwellings and sheltered 60% of the local population. These typical residences kept the original estate market records of the city. As these houses originated in the concession, they almost monopolized the city’s estate market due to their comfortable, practical and convenient advantages. Apart from these, they were popular because of their good locations, centered distribution and convenient transportation. Such residences were originally built at East Beijing Road, Fuzhou Road, Middle Henan Road and the western surrounding areas. As time passed by, they gradually died out with the pace of the reconstruction of the old areas. Later when some influential architects put forward that these residences should be preserved as a symbol of the typical Shanghai culture, great attention started to be paid to them.

Shikumen Culture
The appearance of these residences broke through the Chinese traditional lifestyle, under which a large extended family lived in a big courtyard. The new smaller-sized courtyard came into being to lay a foundation for the later Lane Culture. Naturally, Ting Zi Jian (a small room in a building), Ke Tang Jian (living room), Tian Jing (patio) and Seventy-two Guest Rooms are all relevant expressions in the Shikumen culture.

This local culture had a great influence on Shanghai’s politics, economy, literature, arts and lifestyle. The literature school of “Ting Zi Jian” was born at the same time. Later the scholars created a large number of masterpieces. Similarly, the architecture also provided abundant opportunities for art creativity so that many movies and music works were made on their background. What’s more, due to their complicated and diverse residences, the local inhabitants formed a distinct lifestyle, which laid a solid foundation for their diverse costumes, dieting habits and life habits. 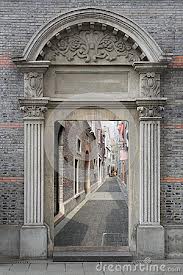 Shikumen Residence Museum
Shikumen Style HousesThe museum not only presents the typical Shanghai architectural style, but also revives the life space and style of the local residents. In fact, it was reconstructed from an old Shikumen house in the 1920s. Covering 514 sq meters (about 614 sq yards), the museum only includes seven rooms – living room, study, senior’s room, landlord’s room, daughter’s room, son’s room and the kitchen.

The displays in the museums are all about the daily necessities of that time. The cooking range, some textbooks, lipstick and rouge are among them. In addition, the whole setting of the museum depicts the vivid life of a middle-class family. “Wu Li Xiang”, meaning “home”, should be the most representative local expression, whose corresponding expression in English is “Open House”. At that time, “Wu Li Xiang” made the neighborhood closer and more harmonious. Living in the nearby residences, people queued up to use the public kitchens and toilets and chattered with each other as they dried their washing in the yards.