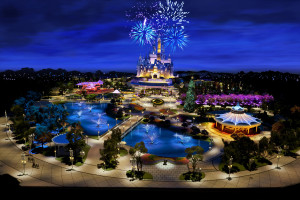 The opening ceremony for the construction of Shanghai Disneyland was held on April 8, 2011, which means the long-waited Disneyland is finally to open in Shanghai, the biggest city in China. This is the biggest Sino-foreign joint investment yet in the country’s modern service industry. It is expected to open by the end of 2015.

It is known that among the first five Disneyland Resorts, Orlando Disneyland in Florida with an area of 12,228 hectares is counted as the largest while Hong Kong Disneyland with an area of 126 hectares is the smallest. Orlando Disney boasts four theme parks: Animal Kingdom, MGM Studios, Epcot, Magic Kingdom and two water parks. It takes at least 5 days to have a thorough tour. Shanghai Disneyland, the 6th one of the world, resides in Chuansha New Town of Pudong New Area. The first period construction of Disney Resort covers 390 hectares, including the core area, 116-hectare Magic Kingdom. The infrastructure and supporting facilities consist of the theme hotel, retail store, restaurant, parking lot, central lake, traffic hub, etc. In addition, Shanghai Disneyland will be the first Disney World without the Main Street, U.S.A.

It is reported that the estimated total investment of the park is CNY 24.5 billion, surpassing 2010 Shanghai Expo infrastructure investment of CNY 23.6 billion RMB, let alone that of the Shanghai Maglev and International Circuit. What about the investment of other Disneyland in the rest of the world? Europe Disneyland in Pairs cost a total amount of 4.4 billion dollars; the one in Tokyo, famed as the No.1 Park in Asia used money as much as 700 billion Yen; the one in Hong Kong required a primary investment of 3.5 billion dollars. Among the five other Disneyland parks, Hong Kong Disneyland Park set the lowest price of 350 HK$. Insiders told that the ticket price of Shanghai Disneyland will be between 300 and 400 HK$, but yet to be confirmed.

There will be the biggest Disney castle in the center of the Magic Kingdom of Shanghai Disneyland. Although no detailed information was revealed, the CEO of the Walt Disney Company said that no two Disney Worlds in the world are ever identical. As it is shown in the opening ceremony on April 8, the Mickey Mouse and Donald Duck were dressed in red Tang suit. Disneyland in Shanghai will try to get close to Chinese visitors by cut-in Chinese cultural elements.

Opinions are divided on whether this Disneyland will make money. Some say that such a project will not only boost tourism, service and estate industries, but also provide job opportunities. Disneyland is more than an amusement park. It is a giant money-making machine with components of hotel and tourism sectors. Others say that while it produces great taxes, it brings side effects to the third industry of Shanghai. In view of the balance of the entire nation, Shanghai Disneyland will rival the one in Hong Kong, whose investment has not been covered yet.

Voices from China say that Disneyland is the symbol of American pop culture and an American cultural spaceship of a successful joint of Commerce and Entertainment, thus its settlement in Shanghai is a form of “cultural aggression”. With the inauguration of Shanghai Disneyland, there will be 6 Disneyland Parks in the world, 3 of which is located in East Asia, 1 in Japan and 2 in China, forming a triangle on the map. It seems that the American culture and ideology is stepping into the hinterland of the Oriental culture gradually.

Another problem that some experts concern is that Disneyland Park will become the “land of happiness” for children in rich families and the “land of grievance” for children in poor families, thus unfavorable for social harmony. Mickey Mouse and Donald Duck in China are hot enough to attract children in rich and poor families alike. However, chances are that poor children can not afford the tickets even though Shanghai Disneyland set the lowest price. Some even suggest putting the investment on education.

At present, there is only one big amusement park in Shanghai, the Happy Valley. Disneyland will bring about a change in the atmosphere, the one with international brand identity and different cultural background. In fact, many people express optimism about the park attendance and consumption capacity. As per the statistics, the Disney World in Orlando Florida receives about 30 million visitors every year, Tokyo Disneyland about 20 million. The one in Shanghai is estimated to accept 7 million at the start and will reach over 17 million later on. Many visitors, especially Chinese citizens are excited about the construction of Shanghai Disneyland. Comparatively, both Disneylands in Hong Kong and Tokyo are inconvenient to visit and heavier in the cost.

RISH Chinese Summer Camp takes this opportunity to introduce this famous park to our students in 2016.
Click Here to Read More