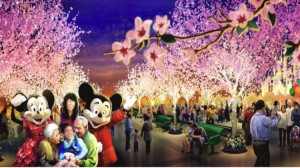 A large transport terminal will be built alongside the Shanghai Disney Resort, according to the Shanghai Morning Post quoting the operator of the country’s second Disneyland.

The terminal, at the western entrance to the 3.9-square-kilometer park, will include five traffic booths, parking lots for taxis, and a terminus for buses running inside the park. RISH Chinese Summer Camp takes this opportunity to introduce this famous attraction park in the future.
Click here to see our summer program !

One of the main metro stations at the theme park will feature huge skylights. The Disneypark station, on metro line 11, will be half underground but architecturally in harmony with its surroundings.

The design of the metro station will also take children’s needs and convenience into account.

The park, scheduled to open in 2015-16, will also feature entertainment facilities, rest areas and entertainment.