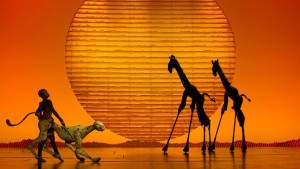 Shanghai Disneyland proudly presents the first-ever Mandarin stage production of the Broadway hit, THE LION KING. Come celebrate the “Circle of Life” during one of the most popular and acclaimed musicals of all time at the lavish 1,200-seat Walt Disney Grand Theatre in Disneytown.

Based on the blockbuster animated motion picture, director Julie Taymor brought a new depth to this classic story in reinterpreting it for the stage, teaming with legendary composers Elton John and Tim Rice to create a celebration that dazzles the senses and touches the heart.

See the musical production that roared onto Broadway and created an international theatrical sensation. With breathtaking choreography, costumes, makeup and staging that transport you to the African savanna, THE LION KING is more than entertainment—it’s an adventure.

From the stunning open to its rousing finale, THE LION KING is an extraordinary theatrical event. Actors are transformed into animal characters through spectacular costumes and makeup. The stage becomes the stark African plain. And the audience is drawn into the gripping tale of a lion cub who must find the courage to overcome tragedy and take his place as the leader of his pride.

From award-winning music and show-stopping dance numbers to the hilarious comic antics of Timon and Pumbaa, THE LION KING is unforgettable entertainment for the whole family.

Stellar Talent Behind the Scenes

A once-in-a-generation phenomenon like THE LION KING began with a rare convergence of artistic genius. Starting with the uplifting original movie screenplay and a score by legendary musician Elton John and acclaimed composer Tim Rice, Disney Theatrical Productions turned to Julie Taymor to bring the story to the stage.

Taymor’s innovative work in puppetry, scenic and costume design had earned her awards and critical acclaim. And these talents—plus a bold creative vision—were the keys to making THE LION KING an awe-inspiring theatrical achievement.

With three new songs by John and Rice and Garth Fagan’s Tony Award®-winning choreography, even if you’ve seen the movie, seeing THE LION KING come to life on stage is a spectacular and unforgettable experience.

The Legacy Comes to Shanghai

Over 80 million people on 6 continents have made THE LION KING the most successful theatrical attraction ever.

The visually stunning, emotionally uplifting production was an instant hit with critics and audiences. All told, the musical has garnered over 70 major awards, including Tony Awards® for Best Musical, Scenic Design, Costume Design and Choreography.

This Mandarin presentation marks the eighth language that THE LION KING has been performed in during its 22 global productions. Combined, these performances have garnered more in ticket sales than any movie or stage play in entertainment history!

Now, this international phenomenon is making history right here at Shanghai Disney Resort, with the first-ever Mandarin language production. Come “feel the love” and discover the magic of THE LION KING live on stage.