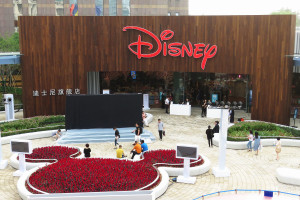 The Walt Disney Co. opened its first Disney Store in China, getting started on a major expansion into the world’s second-largest economy.
The store, at 9,257 square feet, is Disney’s largest in the world, the company said Wednesday in a statement. It is located in Shanghai’s Pudong district, where Disney plans to open a 34 billion yuan ($5.5 billion) theme park next year.
Disney, the world’s largest entertainment company, is betting China’s emerging middle class will embrace brands such as Marvel, Pixar and Star Wars, and boost the company’s international revenue. The country’s rapid economic growth has made it a prime target for Western brands, though cultural and bureaucratic challenges increase the risk.
“We’re most excited about what we see in terms of the prospects outside the U.S.,” Chief Executive Officer Robert Iger said on May 5. “With the opening of Shanghai Disney Resort next year, that should drive growth well into the future.”
Disney, the world’s biggest theme-park operator, has parks in Japan and Hong Kong. It has 46 Disney Stores in Japan, though none in Hong Kong.
The Shanghai store has a castle at its center with an hourly music and projection show, a Marvel-themed area and a plaza outside with Disney characters hidden in the tree-covered landscape.
The date and time of the store opening correspond with Chinese characters used in social media to symbolize love and long-term commitment, the Burbank, California-based company said in a statement.